If your house is among the 80 percent of American homes that are “solar viable” (according to Google’s Project Sunroof), now might actually be a smart time to start powering your home with sunshine. No, we’re not being naïve about the state of the economy or the cash crunch many American households are facing.

The truth is, more and more people are going solar with no money down—and saving money on their electric bill from day one. What is this dark (er…light) magic, you ask? Residential solar technology—and the industry that deploys it—have driven costs down to the point where powering your home with the sun’s energy can, for many homeowners, be cheaper than buying electricity from ye olde utility. As for the no-money-down part, solar owners are increasingly taking advantage of financing methods (like solar loans and solar leases/PPAs) that have become commonplace around the country.

With a solar loan, many homeowners can basically swap out some or all of their monthly electricity bill with a (lower) solar loan payment. A solar company installs a system on your home at little-to-no upfront cost and then you finance the system over time. No forking over cash for panels or installation, and in some cases, you pay nothing for a whole year. And, because you own the solar system, you can still benefit from the federal tax credit for solar (which saves folks an average of $9,000) and other state, municipal, and utility incentives. Think solar loans sound risky? They’re not. In 2019, the majority of customers paid for their installations using a loan—and they’ve become a popular alternative to outright cash payments for solar.

A second affordable financing route is a solar power purchase agreement (PPA) or solar lease. Like a solar loan, PPAs and leases require no upfront cost, and you don’t pay for the panels or the installation. Unlike a solar loan—in which you ultimately own the installation—under a PPA or lease, a third party owns and maintains the system on your home, while you commit to pay a fixed amount per unit of energy produced (or a fixed monthly payment, in the case of a lease). Just like a loan, though, you’re cutting your monthly electricity bill and hanging on to your cash.

Over half of U.S. states permit solar PPAs and leases, so there’s a good chance that zero percent-down solar is an option for your home.

The other big option is to pay cash for a rooftop system. The cost for an average-sized installation usually ranges from $11,000 to $15,000 after solar tax credits. Check also for municipal and/or utility incentives applicable to your home.

If you’re still thinking “all very cool—probably won’t work for my home, though,” then you might have missed our opening sentence: according to Google’s Project Sunroof, four out of five homes in the U.S. are “solar viable” (meaning that there’s enough unshaded area for solar panels). It’s also incredibly easy (and free) to have a solar installer assess your home’s potential.

Solar can now be an affordable investment on almost any budget—even during tough economic times. By powering our homes with the sun, we can untether ourselves from fossil fuels, save money, and take part in the transition to a clean energy future. All in all, it’s getting harder to find a good excuse not to go solar.

On most (quarantine) days, it might feel a smidge perverse to think of the COVID-19 crisis as an opportunity. Our economy is going to hell, we’re losing jobs in droves, and we can’t even go enjoy a good restaurant meal. But in our shattered state, we also have a chance to rebuild—healthier, more resilient, and more equitable than before. We have a once-in-a-lifetime opportunity—and a responsibility—to move our country forward to a healthier future rather than backward to a status quo ridden with critical underlying conditions (read: climate crisis, inequities, broken healthcare system…). This cartoon (from illustrator Brenna Quinlan) captures the moment well: 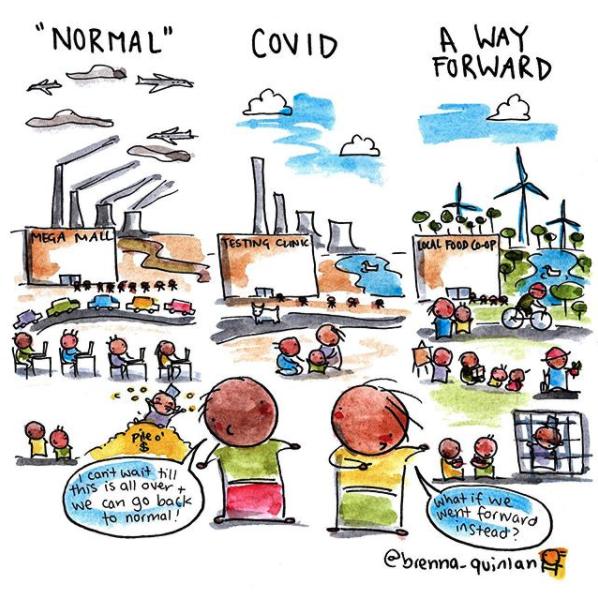 Putting stimulus funding toward clean energy is a critical way our government can capitalize on this opportunity and move us forward.

By investing in industries like wind, solar, electric transportation, and others, we can emerge from this crisis closer to unlocking the clean air, healthier communities, stable domestic energy sources, and massive job- and value-creation that clean energy offers. To be clear: the transition to clean energy is already underway; we now have a chance to accelerate it—in a game-changing way. So let’s tell our representatives how we want our money invested.

If this thinking resonates with you, you’re not alone: most of the American public is already on board. In an April poll, two-thirds of voters supported giving stimulus funding to renewable energy companies, while less than half supported bailouts for the oil and gas industry. Accelerating the clean energy transition in this moment isn’t a technical or PR problem—it’s a political one.

To emerge from this pandemic crisis stronger than when we started, we need to focus on “building civilization back in a hardier and more resilient form,” as climate advocate Bill McKibben recently put it. Isn’t that part of the American ethos? So—why can’t a clean energy economy be the next great chapter in our country’s history?

Originally published in the 5/20/20 edition of our Flip the Script newsletter.

On April 11, Virginia officially began its transformation from a clean energy laggard to a regional leader. By signing the Virginia Clean Economy Act (VCEA), Governor Northam enacted landmark legislation that makes Virginia the first state in the south to commit to 100% clean energy by 2050.

In addition to setting strong climate goals, this newly signed law, in coordination with the Solar Freedom Act, removes limits and barriers to clean energy that had previously stifled the transition away from fossil fuels. These new laws now require all investor-owned utilities in Virginia to allow their nonresidential customers (e.g. businesses, municipal buildings, schools) access to a crucial financing mechanism that helps these customers go solar.  This mechanism, called a third-party power purchase agreement (PPA), was used to finance 86% of the existing solar on Virginia’s K-12 public and private schools.

Solar growth—ground to a halt

Before these laws were passed, schools planning to go solar were stymied by a cap on PPAs. In January of this year, the 50 MW cap on third-party PPAs in Dominion Energy territory had been reached. New solar projects for schools, nonprofits, and businesses ground to a halt when Dominion’s pilot program closed.  Prior to the new laws, power purchase agreements weren’t even allowed for K-12 schools in Appalachian Power and Old Dominion Power territories.

Generation180’s November 2019 report on solar in Virginia’s schools helped bring this issue to light. We rallied support from concerned citizens and school districts around the state to support better policies, including VCEA and the Solar Freedom Act. (Check out our recent advocacy blog post here and a guest blog post by two Richmond school board members here). While there are still caps on PPAs, the new laws significantly raise these limits and enable Virginia’s school districts to meaningfully contribute to the state’s transition to 100% clean energy.

Time to make some (solar) moves

The new legislation will swing the doors open for Virginia’s school districts to capture the savings, educational opportunities, and environmental benefits that solar brings. Over the past five years, the solar capacity installed at K-12 schools statewide grew by over 60X.  That exponential growth of clean energy is expected to continue, at least until the new limits are reached.

Here’s more good news: no matter what your role might be (such as student, parent, grandma, teacher, community member, or school administrator), you can help your local school go solar. Our free Solar Schools Campaign Toolkit lays out every step of running a campaign in your community. It’s time to get more of our schools saving money, enhancing STEM learning, and driving our transition to a clean energy future.

Here’s a summary of changes to third-party power purchase agreements enacted in the new legislation that will be effective beginning July 1, 2020: