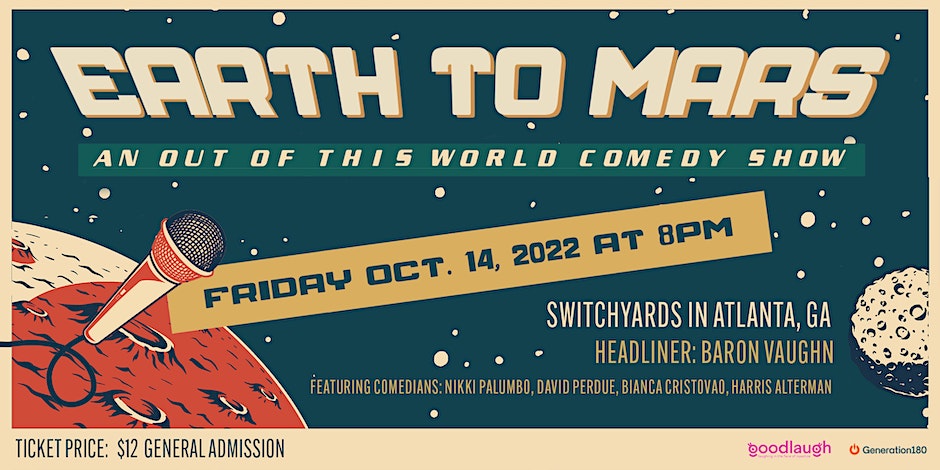 The Earth to Mars Comedy Tour is coming to ATLANTA! This tour features comedians you’ve seen on The Late Show with Stephen Colbert, Comedy Central, OWN, and TruTV. After a showcase in New York, they are taking the laughs coast to coast and stopping in towns big and small on their way to a final show in Los Angeles.

Headliner Baron Vaughn has performed on Comedy Central in his own Half Hour, and The Meltdown with Jonah and Kumail. He’s also appeared on HBO’s 2 Dope Queens, Showtime’s SXSW Comedy, and TBS’ Conan (twice). On top of headlining major clubs and colleges all over the US, Baron has performed at the Just for Laughs (Montreal), Life Is Beautiful (Las Vegas), and the New York Comedy Festival among others.

Bianca Cristovao has toured with Bill Burr and recently appeared on The Late Show with Stephen Colbert.

David Perdue has appeared on Kevin Hart Presents: Hard of the City on Comedy Central, as well as FuseTV, OWN, and truTV.

Nikki Palumbo Nikki has written for the MTV Movie & TV Awards: Unscripted, hosted by Nikki Glaser, and worked as a story producer on the YouTube Originals weekly music show, RELEASED.

The show is co-produced by Generation180 and CMSI‘s Good Laugh. Head here to learn more and buy tickets.